The 1960s heralded a time when scientific curiosity was high in everything nuclear.

EES opened a Radioisotopes and Bioengineering Laboratory in 1959. Home to expensive specialized equipment, the lab catered to academic and research activities

In 1963, the domed centerpiece of EES’ nuclear research program was dedicated. The Frank H. Neeley Nuclear Research Center was the largest construction project on campus to date — and only the second such facility at a university. Early projects included a study of reactor kinetics parameters for the U.S. Atomic Energy Commission.

The Georgia General Assembly added to EES’ responsibilities when it amended the original 1919 charter to authorize a statewide "industrial extension service to meet the technical, informational and other needs of industry and local development groups." In fact, the mandate built upon some of the services EES already had been offering since the 1940s.

The first field office of the Industrial Development Division opened in Rome, Georgia, in 1961. The primary job was to stimulate expansion and diversification of business and assist startups or struggling companies requiring short-term management and technical expertise.

Georgia was just a starting point. An international development initiative, started in 1964, burgeoned into activities encompassing several multi-year, multi-million-dollar programs in more than 40 developing countries. Over the years, EES/GTRI has conducted projects, such as:

EES’ compliment of research and development for the military included combat surveillance radar and directional acoustic detection systems, both for the U.S. Army, and a study of compact antenna range techniques for the Air Force. The compact range, invented by Dr. Richard C. Johnson in 1966, has proven to be among the most useful and durable innovations in electronics research.

Other projects included an investigation of techniques for improving the operation of the Saturn rocket's radar, and a study of electrical power systems for space vehicles. Both paved the way for Apollo moon landings.

Traditional EES strengths were bolstered with several other important projects during the 1960s, including:

EES' Van Willis uses "Long Tom Cutie Pie" for a radiation survey around a 3750lb carrier in the Radioisotopes and Bioengineering Laboratory, 1960. 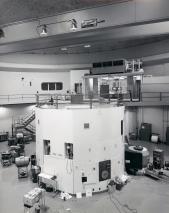 In 1976, the Agency for International Development contracted with EES to field test n AID/Battelle hand-operated water pump in Costa Rica. 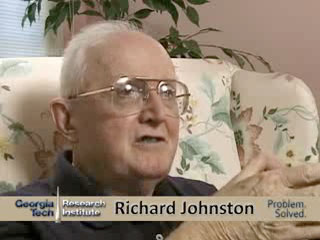 Veteran researcher Richard C. Johnston, TE 1948, was at EES when the multiple successes of state’s research stations led to developing international programs. It was recorded on September 10, 1998. 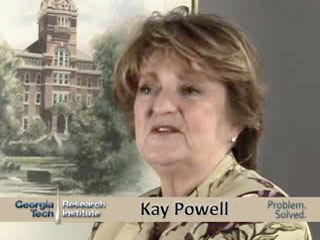 Kay Powell worked in an EES field station in the ‘70s as an economic developer in the Augusta area. Women were new in field work and Kay managed to break not only that barrier but a few more. Her story was recorded on December 8, 2006.

The history of GTRI is one filled with intrigue, innovation and impact. Learn about GTRI's exciting past, present and future. View video
< The Age of Automation ArrivesUpResearch “For the Sake of People": Early Social Entrepreneurs >