A Solution to Long-Term Growth

The prospect of a peacetime economic boom and unprecedented research opportunities provided ample reason for optimism. But the EES' long-term outlook was jeopardized by a ruling from the Board of Regents of the University System of Georgia (USG).

The ruling required that all money received in one year had to be spent in that year. Funds could not be carried over year to year. This presented a problem for the EES, where multi-year contracts — a staple of government work — were viewed as key to long-term growth.

A solution was devised by Georgia Tech's president, Blake Van Leer, and Dean of Engineering Cherry Emerson. It was to charter an independent nonprofit corporation that would solicit and sign contracts with research customers then hire EES to perform the actual work. The key proviso, from the State of Georgia's point of view, was that the new entity must shield the state from lawsuits.

The corporation would also handle the all-important patenting process for EES innovations — an ongoing source of revenue. Because it would be separate from the USG, the organization would be able to accumulate and redistribute funds, and thus carry over projects from one fiscal year to the next.

The organization would be governed by a board that included the president of Georgia Tech, as well as alumni and industry representatives. It also provided a way to effectively separate Georgia Tech research income from EES research income.

During EES' first year operating under the new structure, 1946-1947,a full-time staff of 56 scientists and 95 part-time researchers conducted research worth $441,000 — 87% of which came from outside contracts.

In addition, EES installed an electron microscope, the first in the Southeast and one of few anywhere else in the country. The $13,000 instrument was quickly put to work.

"This instrument will enable us to obtain much basic information on many problems in the fields of medicine, biology, bacteriology, agriculture, metallurgy, textile fibers, and ceramics," said EES Director Gerald Rosselot.

He elaborated, "It will greatly complement the other equipment with which the Engineering Experiment Station is investigating problems of importance to Georgia and the South, and will be used in cooperative research with other colleges and universities of this area." 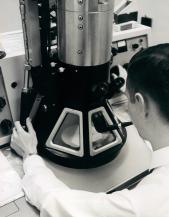 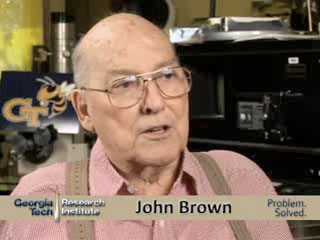 Research scientist John Brown, PHY 1950, an expert in the use of the electronic microscope talks about his work at EES and the serendipitous opportunity to work with the microscope came about. It was recorded on September 9, 2008.

The history of GTRI is one filled with intrigue, innovation and impact. Learn about GTRI's exciting past, present and future. View video
< Government Spurs Electronics ResearchUpEES Installs “Electro-Mechanical Brain” >