The terrorist attacks of September 11, 2001, defined a number of GTRI's activities in the early 21st century. Attention shifted to preventing such attacks and finding ways to mitigate the effects of a disaster, whether natural or man-made.

GTRI's contributions to security and preparedness include the development of biosensors for detecting biological contaminants and an internet-based medical reach back system for transmitting vital patient information from the field to a command post.

GTRI scientists designed a knowledge-management system and comprehensive physical and environmental security system to enhance airport security. Another project was to devise flare decoys that, when dropped by planes, confuse the infrared tracking systems used by missiles. The flare decoys help ensure the safety of military aircraft.

As so often happens with GTRI research, the solution to one problem dovetails with another. An innovative method of killing anthrax spores with X-rays and ultraviolet-C light shows promise as a way of disinfecting wastewater. Data-mining software designed to extract, generalize, categorize, and index electronic records could be useful for law enforcement as well as researchers of all stripes.

Reedy and his group solicited contributions from the agricultural industries that stood to profit from Georgia Tech research in food processing. The combination of funding from the state, Georgia Tech, and private industry resulted in the $7.3 million, 36,000-square-foot Food Processing Technology Research Building, dedicated in 2005.

The facility stands as an example of "how the state and Georgia Tech can work together to produce something of significance," said Reedy. "You can ask just about anybody in the food processing and poultry industry in Georgia, and they'll point to Georgia Tech's programs as having a major impact." 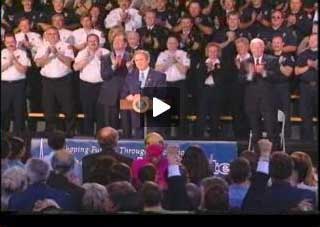 The history of GTRI is one filled with intrigue, innovation and impact. Learn about GTRI's exciting past, present and future. View video
< GTRI Builds on Industry RelationshipsUpCross Touts 'Interdisciplinary Focus' >