The centerpiece of Atlanta's 1996 Summer Olympic bid package was a seven-foot-tall, three-screen interactive video-disc system equipped with touch screen and trackball controls. It was developed by Georgia Tech and GTRI researchers, with assistance from other universities and off-campus organizations.

Three versions were produced. One involved a flat-panel visual display, originally built for use in submarines in 1964.

A second involved a small, plastic three-dimensional model of the Olympic Village, illuminated with computer graphics. It displayed vignettes about a day in the life of an athlete when a particular building or area was touched.

A third featured a full-color computer-simulated "fly-through" of the Olympic whitewater events venue. It was designed to orient TV viewers whenever Olympics coverage shifted from Atlanta-area sports venues to the whitewater course in Tennessee. GTRI developers integrated data from the LANDSAT satellite, high-altitude and low-altitude photography, and U.S. Geological Survey elevation information into the simulation.

Georgia Tech served as the Olympic Village, and the Olympics itself became a laboratory. GTRI investigators worked on transportation issues for applications beyond the games. In one project, helicopters used mainly to transport packages and documents during the games were outfitted with a global positioning system for navigation, tracking, and communication.

Back on the ground, the Olympics' traffic logistics presented a unique opportunity to test an information system that could improve mobility in urban areas. A fleet of vehicles was networked by 220 MHz transceivers and a subcarrier from a commercial FM broadcast station.

The vehicles received information about congestion, incidents, and weather and special-events data over RF links. GTRI's role was to evaluate the technology's performance, as well as development, implementation, and analysis of error-correction techniques for use in the 220 MHz transceivers.

At the Olympic natatorium, built on the Georgia Tech campus expressly for swimming and diving events, GTRI and Georgia Tech scientists took advantage of the opportunity to deploy and monitor a rooftop photovoltaic electrical system. The system was designed to provide 25% of the venue's power needs through 2,856 DC solar modules, generating a combined 340 kW.

The seven-foot-tall videodisc system was cutting-edge technology in the early 1990s.

During the 1996 Olympics in Atlanta, GTRI's Charles Stancil led a team that successfully demonstrated the use of GPS technology for guidance and navigation of helicopters in the urban environment. 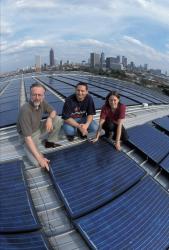 Atop Georgia Tech's Aquatic Center, nearly 3,000 photovoltaic panels produce as much as 30 percent of the electricity needed by the building, 2002. 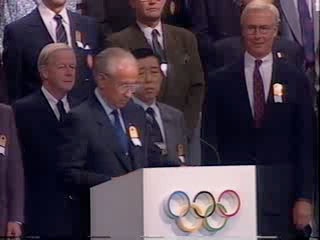 The history of GTRI is one filled with intrigue, innovation and impact. Learn about GTRI's exciting past, present and future. View video
< GTRI Broadens its Research CapabilitiesUpRecognition and Reorganization >