In 1993, the Defense Conversion Working Group was formed to devise Georgia Tech's approach to non-military opportunities in the post-Cold War period. The working group identified several areas suited to GTRI's expertise in which to pursue contracts.

An Advisory Council of outside leaders was created to help GTRI navigate its way through the transition. To ensure that internally funded projects stayed in concert with the broader research direction, a Fellows Council of top GTRI researchers replaced the Senior Technology Guidance Council established a few years earlier.

By 1994, while the U.S. Department of Defense spending remained the largest part of the budget, its overall share decreased. Increases were registered in the shares of every other research category.

Connections with industry were further developed with new education services. For example, GTRI's Safety and Health Consultation Program advanced a proposal to integrate a comprehensive safety and health-management system into the operations of its corporate customers. GTRI's education offerings continue to the present day through Georgia Tech's Professional Education program.

In other areas, GTRI investigators perfected an X-ray analysis technique enabling researchers, for the first time, to visualize step-by-step, and in microscopic detail, the formation of a ceramic composite material.

Truly was succeeded as director by Edward Reedy, who joined Georgia Tech as a research engineer in 1970.

In April 1997, GTRI entered into a $17 million contract with mPhase Technologies, Inc. to develop a groundbreaking system that incorporated digital subscriber line (DSL) communications with sophisticated digital signal processing and filtering. The mPhase contract was, and still is, the single largest non-defense commercial research contract in GTRI history.

It was also GTRI's first-ever concept-to-production-to-marketplace contract. It heralded renewed ambitions by GTRI to make major contributions with and for industry in growth areas like telecommunications.

Another way in which GTRI was able to weather changing markets in the late 1980s was to promote its expertise in retrofitting existing military hardware with new technology. As a cost-saving alternative to building new systems from scratch, the idea of updating aircraft, in particular, found a receptive audience at the Pentagon and Capitol Hill.

GTRI frequently touted the success of Scientific-Atlanta as an example of the technology-focused economic diversity that organizations like GTRI were intended to bring about. And in 1998, one of the original Scientific-Atlanta founders, Glen Robinson, paid tribute to the place where he got his start.

Robinson donated $1.5 million to endow a chair in electro-optics. The gift was the research institute's first endowed chair. It is now known as the "Glen Robinson Electro-Optics Chair."

GTRI researchers developed and patented a hydrogel air-cleaning media that removed 50 percent of respirable-sized airborne particles and 80 to 90 percent of gaseous air pollutants, 1998.

GTRI showcased its expertise in modernizing existing military hardware by moving the MH-53 Pave Low helicopter from a cargo transport vehicle to one that supported special operations. Copyright U.S. Department of Defense. 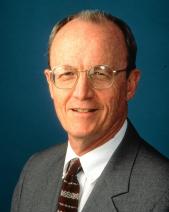 The history of GTRI is one filled with intrigue, innovation and impact. Learn about GTRI's exciting past, present and future. View video
< From Swords to Plowshares: Truly Takes the HelmUpReedy Leads GTRI into a New Century >