In the middle 1980s, GTRI was awarded the first in a series of contracts related to the International Space Station. Early work centered on antenna for the station's command and control needs, as well as operations associated with co-orbiting satellites.

Researchers also tackled the design and specifications for a robot that could perform certain types of experiments on the orbiting station while remotely controlled from Earth. Another project involved the design of an electric power system that used large dish sunlight collectors.

In 1987, GTRI researchers unveiled their first light detection and ranging system, heralding a new field of study for Georgia Tech. LIDAR works in a similar fashion to radar, but with light instead of radio waves.

Also, in 1987, the Senior Technology Guidance Council was formed to identify internally funded research opportunities based on GTRI's capabilities as a whole rather than by any individual lab. Among the first projects approved under the structure was an FM laser spectrometer designed to detect atmospheric pollutants in the infrared region. Another was a diagnostic tool to improve silicon plasma etching systems used in fabricating semiconductor devices.

A Culture of Growth

A sampling of new initiatives involved:

Sponsored programs were wide-ranging. They included:

The Materials Handling Research Center was founded in the 1980s. It was dedicated to finding solutions to industry challenges in the efficient handling of products as they moved through factories and distribution systems.

The center quickly became one of the most successful National Science Foundation Industry/University Cooperative Research Centers. More than 20 major companies and federal agencies supported its research. 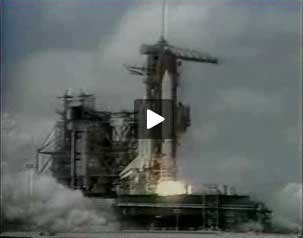 The Pioneering Spirit: Georgia Tech Research and the Space Program (may take a few seconds to load)

EES engineer Vic Tripp and the simulation of the international space station air lock. EES designed a "towel bar" antenna for the chamber that allowed radio communications while people were entering or leaving the station for space walks.

The history of GTRI is one filled with intrigue, innovation and impact. Learn about GTRI's exciting past, present and future. View video
< EES Shapes a New Image and Gets a New NameUpHelping Capture the Olympic Games >