Some of the most important projects coming into the EES involved sensitive communications research for the Pentagon's Office of Scientific Research and Development.

Work picked up sharply in the years immediately prior to and during World War II. War-related projects included an expansion of helicopter research and wind tunnel testing of airfoil designs.

EES' future expansion would rely heavily upon U.S. Department of Defense work, most of it related to electronic communications. Gerald Rosselot, who joined Georgia Tech in 1934 as a physics and mathematics instructor, is often credited with EES' entry into electronics during and after the war. He began a 10-year run as EES' director in 1941.

An important project with long-reaching implications was a study on the propagation of electromagnetic waves. This was followed by a large U.S. Navy contract for radar research and development. The work set the stage for Georgia Tech's future standing as the country's pre-eminent innovator in radar and defense electronics—a role it occupies to this day.

One interesting radar development offshoot that came about during the war had nothing to do with military applications. An EES electrical engineering professor discovered that certain electromagnetic frequencies would heat food.

He built a box fitted with devices that would bombard the interior with microwaves when a toggle switch was flipped on. Sweet potatoes cut into half-inch thick slices were placed inside the "radar range," and various cooking times were tested with a stopwatch. But because of wartime research priorities, the discovery was never developed further. The radar range or microwave oven was relegated to the realm of EES lore.

By fiscal year 1943-1944, a little more than half of the EES' budget was funded by government and industry contracts — the latter represented by textile, pulp, and lumber industries. More than 30 projects were underway at any given time, employing 17 full-time and nearly 100 part-time researchers. In the last year of the war, 61% of EES' $236,792 operating budget came from government and industry contracts.

Researcher James L. Taylor credits Blake Van Leer, president of Georgia Tech from 1944 to 1955, as a champion of research at Georgia Tech. "Very little research had been done by the faculty before he came," recalled Taylor. "He pushed the Experiment Station. We went from just a teaching school to a teaching and research school." 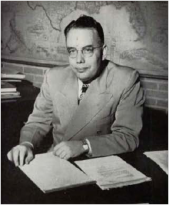 Researcher James L. Taylor and an Instron testing device, which measured the strength of yams and fibers and automatically plotted the data, 1958. 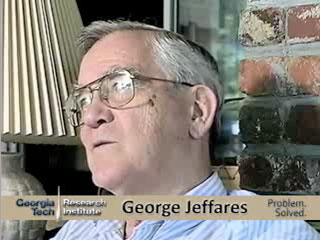 Georgia Tech alumnus George Jeffares, CH E ’46, recalls his early days of working at EES as a student, especially the endless chunks of sweet potatoes being cooked in a “box” that a professor was testing. It was recorded on August 19, 1997.

The history of GTRI is one filled with intrigue, innovation and impact. Learn about GTRI's exciting past, present and future. View video
< Introduction: Solving Problems for 75 YearsUpA Solution to Long-Term Growth >