EES Shapes a New Image and Gets a New Name

"We're finally calling ourselves what we evolved into years ago," said Director Donald Grace. "But we're not only assuming a new identity, we're also shifting emphasis. While continuing to depend upon our backbone of federal government work, we will be more aggressively seeking industrial research contracts as well."

During the first half of the 1980s, GTRI's projects were comprised of:

In 1985, President Ronald Reagan's decision to pursue a missile-defense system-the Strategic Defense Initiative, popularly known as "Star Wars," brought Georgia Tech its largest research contract to date. The $21.3 million award was divided between the School of Electrical Engineering and GTRI.

Other highlights of the decade include:

In 1986, GTRI landed the largest-ever contract of its own — a $14.7 million deal to design and build a simulator of a Soviet surface-to-air missile system. The training set included a full emitter-receiver-processor, along with target acquisition and tracking radar, command transmitter, missile tracking radar, and display systems. The huge system was housed in a 40-foot trailer and three 20-foot transportable shelters.

The simulator project underscored GTRI's astonishing progress. Not only was it a worthy engineering challenge, but its $14.7 million budget alone was more than double the entire research budget for both Georgia Tech and the EES in 1972. In fact, in 1985, combined research spending at Georgia Tech and GTRI reached $85 million.

But more than money was to be earned. The next year, the steady climb of Georgia Tech and GTRI toward the spotlight of national recognition was rewarded when the National Science Foundation named Georgia Tech the top university in the country for engineering research and development.

GTRI's Darrell Lamm tests a FLIR system before researchers mounted it on a helicopter for test flights, early 1980s.

EES engineer Vic Tripp and the simulation of the international space station air lock. EES designed a "towel bar" antenna for the chamber that allowed radio communications while people were entering or leaving the station for space walks. 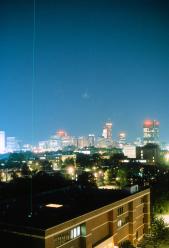 In 1989, GTRI engineers assisted the U.S. Air Force with converting a huge test collinator at Wright Patterson Air Force Base into the world's largest light detection and ranging system (LIDAR).

Original GTRI logo and the first official use of the organization's new name.

The history of GTRI is one filled with intrigue, innovation and impact. Learn about GTRI's exciting past, present and future. View video
< Change at the Top: The Grace YearsUpGTRI Broadens its Research Capabilities >