In 1947, EES' reputation and capabilities took another giant leap forward when Georgia Power Company generously donated an AC Network Calculator to Georgia Tech. The $300,000 "electro-mechanical brain" was an analog computer — a fantastically complex collection of resistors, capacitors, and inductors.

The machine helped engineers solve difficult linear and nonlinear equations associated with load division, short circuit, and stability problems, and thereby model the most efficient electrical distribution systems. It was only the sixth such machine installed at a US university and the first in the Southeast.

Another project involved a multi-year collaboration between EES and the University of Georgia College of Agriculture. To make peanut farming more profitable, researchers produced more efficient and economical harvesting and processing machinery.

Researchers also solved certain technical problems in the shelling operation, while devising improvements in sampling and grading, storage, and loading. Experiments with an electric eye to aid in quality-picking machinery were a harbinger of machine vision work that would prove valuable to the poultry industry decades later.

In 1948, the Engineering Division of the Association of Land Grant Colleges and Universities compiled the dollar value of research conducted at 24 state-supported engineering experiment stations. Georgia Tech placed first in the South and second nationally, behind Purdue.

Back on Georgia Tech's North Avenue campus, EES' chronic lack of space was somewhat mitigated with yet another addition to the Research Building. The entire structure was renamed for Atlanta dentist Thomas Hinman, whose memorial foundation's contribution had made the new construction possible. This gift allowed EES to have state-of-the-art research facilities and facilitated rapid growth.

The occasion was soon followed by another milestone: EES research income topped $1 million for the first time. It would double within five years.

The onset of the Cold War and the Korean conflict triggered a massive and sustained influx of federal research dollars to universities across the country. EES' share included a number of US Department of Defense contracts, many of them highly sensitive, related to:

The projects solidified EES' national reputation for innovative problem-solving, particularly in the fields of radar and the application of microwave technology. More importantly, they established its future course of a substantial reliance on national security contracts. 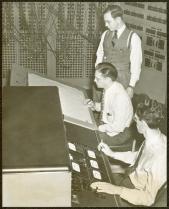 Georgia Tech's A/C Network Calculator in 1948 and 1950. The system provided years of service to the power industry of the South and the nation.

The history of GTRI is one filled with intrigue, innovation and impact. Learn about GTRI's exciting past, present and future. View video
< A Solution to Long-Term GrowthUpResearchers form Scientific-Atlanta >