W. Harry Vaughan and his cohorts would no doubt be suitably impressed with what they started 75 years ago. And while those pioneering scientists who worked in the basement of the Old Shop Building would scarcely recognize much of the modern GTRI, its fundamental purpose would ring familiar.

"We have an ambitious goal — to be the best nonprofit research organization in the world, not by claim, but by any objective benchmarking criteria. This will take some time, but I have no doubt we can achieve it."

The GTRI of 1934 would easily fit inside one of today's labs with plenty of room left over. GTRI's capabilities are today housed in eight laboratories organized by technical focus. Just as complex problems are multi-dimensional, their solutions often involve a number of perspectives. GTRI's interdisciplinary research centers follow this approach to create practical answers to difficult questions.

The GTRI of 2009 numbered about 1,300 staff members, including nearly 600 full-time engineers and scientists — 70% of whom held advanced degrees — as well as additional faculty members, part-time students and consultants, and support personnel. Over 40 GTRI researchers held appointments with Georgia Tech's academic colleges. Revenues topped the $180 million mark.

GTRI's reach has been extended thousands of miles. Research and business services are provided at a dozen locations in Alabama, Arizona, California, Florida, New Mexico, Ohio, Texas, and Washington, D.C.

GTRI's overseas office, in Athlone, Ireland, opened in 2006 with an emphasis on four areas: internet protocol television, radio frequency identification, biotechnology, and sustainable energy. In addition to anchoring research in these key market-driven areas, Georgia Tech Ireland provided an avenue for Georgia businesses looking for a gateway to the European Union, as well as from Ireland itself.

"This landmark development is a great example of what's possible between institution and country when both are committed to a shared vision of innovation's ever-increasing importance," said Irish President Mary McAleese. "Ireland is delighted to be in partnership with such an eminent research institution. It is a symbiotic partnership that promises significant ongoing economic dividends for Ireland and the state of Georgia." 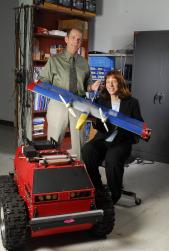 In 2008, GTRI won a contract to support development of a roadmap designed to improve the testing and evaluation of unmanned and autonomous systems for the U.S. Office of the Secretary of Defense. 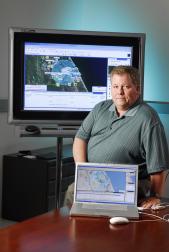 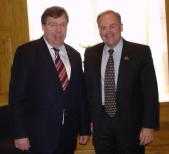 The history of GTRI is one filled with intrigue, innovation and impact. Learn about GTRI's exciting past, present and future. View video
< Cross Touts 'Interdisciplinary Focus'Up"One Georgia Tech" >