Change at the Top: The Grace Years

In 1976, new EES Director Donald Grace inherited a research organization strong in defense electronics and economic development. During his record 16 years as director, research capabilities expanded to include such areas as environmental science and technology, manufacturing, materials science, and energy development.

A sampling of projects conducted in the 1970s included:

Antenna research, another longstanding hallmark of EES innovation, prospered in the 1970s. Projects included a pedestal-mounted scanning antenna for the Air Force and an air-defense antenna for the U.S. Army Missile Command. The latter was developed at the Huntsville Research Laboratory in Huntsville, Alabama, home to the Missile Command and Redstone Arsenal.

The lab, GTRI's first and oldest off-campus research center, has long played a central role in Army research and development. By early 1979, six Georgia Tech research faculty and co-op students had settled into government offices there.

"It gave Tech instant accessibility to the government sponsors who were in need of expertise," said Richard Stanley, who began a 14-year career as Huntsville's lab director in 1984. When Stanley took over as director, the staff was already rapidly expanding.

"We had the full spectrum of research-faculty titles over here, as well as a large number of co-op students," he recalled. "That helped us broaden the scope of our research."

The Huntsville Research Laboratory worked closely with other GTRI labs and helped establish new research collaborations for them. The office acted as GTRI's liaison in Huntsville, as well as a research facility in its own right.

"Huntsville Research Laboratory was a factor in GTRI's becoming a University Affiliated Research Center in 1995," Stanley said. "GTRI's accomplishments at Redstone Arsenal added to Georgia Tech's reputation within the U.S. Department of Defense."

Don Grace's most embarrassing moment occurred in the spring of 1989. The University of Utah announced that one of its chemists, along with a co-researcher from the University of Southhampton in England, had achieved cold fusion in the laboratory.

Within two weeks, researchers at GTRI confirmed the breakthrough. Reporters were called almost immediately with the wonderful news. "We had the media in and had a great presentation," Grace ruefully said.

The trouble was, the original experiment was fatally flawed due to temperature-related instrumentation errors. The Georgia Tech team, following the original experiment’s same protocols in an effort to duplicate the results, arrived at the same wrong conclusion. Only four days after their experiment, the GTRI researchers, led by Dr. James Mahaffey, detected the error.

"Then came time to admit that we were wrong," Grace recalled in a 2006 interview. Universities are notoriously adverse to admitting mistakes in public. Grace said that a number of people strongly advised against going to the media again. But he didn't take that advice.

"Of course it would be embarrassing," he continued. “Jim and I blushed the whole time. But we did something that was incorrect and we had to face up to it and get on with it. It was the right thing to do."

The GTRI millimeter wave direction finding system was used to discover the appearance of objects - from tanks to raindrops - when viewed by high-frequency waves. 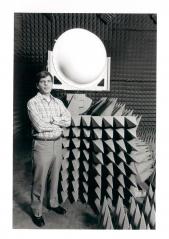 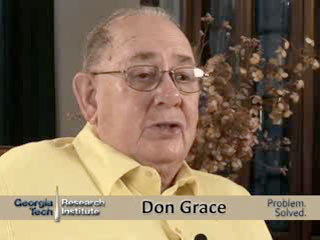 Dr. Don Grace, GTRI director from 1976 – 1993, recalls the infamous tale of the duplication of the discovery of cold fusion and the subsequent need to admit the goof to the media. It was recorded on December 7, 2006.

The history of GTRI is one filled with intrigue, innovation and impact. Learn about GTRI's exciting past, present and future. View video
< EES Defends its IndependenceUpEES Shapes a New Image and Gets a New Name >