The Age of Automation Arrives

In 1954, the new science of computing was rapidly gaining prominence. It would soon become an important field in its own right at Georgia Tech, as well as in its application to the diverse industrial and military research activities at EES.

The Rich Electronic Computer Center — the first facility of its kind in the South — was constructed in 1955. Its mission was succinctly defined as "education, service to industry and research.”

The first computer installed was a large-scale, high-speed UNIVAC 1101 built by Remington Rand. The computer measured 38 feet long by 20 feet wide, with a rotating drum-type memory providing the equivalent of 48 KB of memory. Somewhat akin to a hard disk in theory — but cylindrical in shape with a row of stationary read-write heads — data and programs were loaded on or off the magnetic drum by using paper tape or punch card input devices.

Later, an IBM 650 was acquired, and in 1958, a Burroughs 220 was installed. Considered a medium-scale machine with a core memory of up to 10,000 words at 44 bits per word, the Burroughs 220 was one of the last computers to employ vacuum tubes. Its central processing unit contained 1,800 of them. They cost between $640,000 and $1.2 million, depending on the amount of memory and number and type of peripherals, such as magnetic tape drives, paper tape readers, printers, and so forth.

Georgia Tech's B200 was a workhorse, running 170 hours per month in July 1961. By the following summer, it was humming along 450 hours per month. The computer remained in use through the mid-1960s to teach introductory programming, as most other work had been moved to transistor computers.

Transistors were shaking up the electronics world in the late 1950s. They were replacing vacuum tubes in computers and turning large, complex devices into smaller, complex devices. But they weren't necessarily an easy sell, even inside the EES.

Researcher Fred Dyer was dividing his time between radar work at the electronics branch and the physics branch, where he had become interested in semiconductor transport phenomena. The thought occurred to him: Why not use transistors in radar?

"The people I worked with in the radar business said, 'No way. We're not going to do anything with transistors. They're too fragile and unreliable," he said. "So I spent $25 from my own pocket on some transistors and built a circuit to show them what we could do."

A while later, the radar scientists received a new contract from the U.S. Navy. "The fellow in charge of it announced that we were only to use vacuum tubes when we couldn't use transistors," Dyer said, with obvious satisfaction.

"We were moving closer to the front end of technology. We had some very, very innovative techniques that we had developed in the radar branch — very useful for the military in various target recognition, target signature [applications]."

As the 1950s drew to a close, EES staff could look back on its first 25 years with a profound sense of accomplishment. 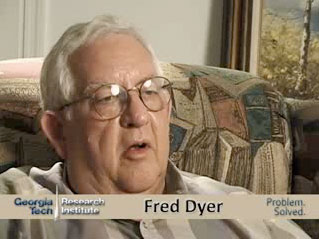 Fred Dyer, PHYS 1957 and MS PHYS 1961, recalls his first project at EES and others along the way. He tells about staff he worked with and what they accomplished back in the 50s and 60s. The story was recorded on June 19, 1998.

The history of GTRI is one filled with intrigue, innovation and impact. Learn about GTRI's exciting past, present and future. View video
< Championing Research PersonnelUpA Time of Transition - the 1960s >