Whitley started with the EES in 1955 as chief of the chemical sciences division, and was later named associate director. Upon then-Director Robert E. Stiemke's appointment to the post of Administrator of Research at Georgia Tech, Whitley became director.

During Whitley's tenure, the level of research activity at EES increased to $7 million from $4 million, and the full-time staff increased by 33 percent.

The Electronics Research Building, completed in 1966, allowed for a large number of the EES research activities to move from more than a dozen temporary locations to under one roof.

And before Whitley's retirement in 1968, the Baker Building--currently home to GTRI Electronic Systems Laboratory (ELSYS)--was under construction.

Whitley served on the board of directors for the Warren Memorial Boys Club and Atlanta YMCA, was a deacon at Second-Ponce de Leon Baptist Church.

For more, visit the Wikipedia article on Wyatt C. Whitley. 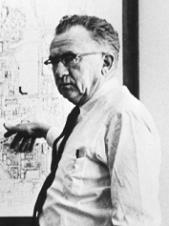 The history of GTRI is one filled with intrigue, innovation and impact. Learn about GTRI's exciting past, present and future. View video
< Robert E. StiemkeUpDr. Maurice W. Long >