Richard H. Truly's primary task was to diversify Georgia Tech Research Institute's client base, a job made all the more difficult because of an economic recession. The end of the Cold War meant that research dollars from the Department of Defense, GTRI's main source of contracts, were drying up.

Truly, the director of GTRI from 1992-1997, proclaimed, "It's very critical right now that we don't turn away from research, so in future years we have the benefits the technologies can bring to bear." Truly, a retired vice admiral, former astronaut, and NASA chief, graduated from Georgia Tech in 1959 with a degree in aeronautical engineering.

In large measure, Truly succeeded. By 1994, while Department of Defense spending remained the largest part of the budget, its overall share decreased from about 76% to just over 70%. The drop was more than compensated by increases in other areas, a trend which led to research contracts topping the $100 million mark for the first time in 1997, with 546 awards totaling $103,061,780.

The transition was started with the aid of the Defense Conversion Working Group, formed to examine Georgia Tech's approach to non-military opportunities in the post-Cold War period. A Fellows Council, comprised of top GTRI researchers, breathed new life into the program, providing funding for internally generated research and development ideas. An Advisory Council of outside experts from academia, government, and industry was established to provide advice and strategic guidance for the research institute's future.

On these high notes, Truly left Georgia Tech in 1997 to accept the positions of director of the Department of Energy's National Renewable Energy Laboratory in Golden, Colorado, and executive vice president of Midwest Research Institute. He retired in 2005.

He added, "Richard Truly returned to Georgia Tech, his alma mater, at a crucial moment in our history. His leadership is the reason Georgia Tech is in the top 10 nationally in industrial research. We're sad to see him go, but we're thankful for all he has done for Georgia Tech and this state."

For more, view the Wikipedia article on Richard H. Truly. 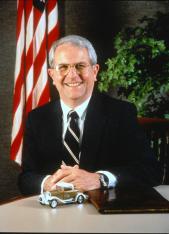 The history of GTRI is one filled with intrigue, innovation and impact. Learn about GTRI's exciting past, present and future. View video
< Dr. Donald J. GraceUpDr. Edward K. Reedy >