Thomas E. Stelson, who was vice president for Research at Georgia Tech from 1974 to 1988, simultaneously served as interim director for GTRI from 1975 to 1976.

Stelson's time at Georgia Tech marked an increased focus on basic research, applied research, and academics. With this increased research focus, more funding was allowed for academics, which in turn allowed the university to begin its steady rise in the rankings.

During his tenure as acting director, he organized GTRI into eight semi-autonomous laboratories in order to promote specialization and unique clientele. With some slight modifications, GTRI retains this model today.

Stelson was named the first executive vice president (provost) of Georgia Tech in 1988, where he helped Georgia Tech President John Patrick Crecine reorganize the university into five colleges. In 1990, he left to become a founding administrator at Hong Kong University of Science and Technology, a post he held until 1994.

Stelson was on the faculty of Carnegie Mellow University for 20 years until 1971. During this time, he served as head of Carnegie Mellon's Civil Engineering department. When the Silver Bridge failed in Point Pleasant, W.V., in 1967, NBC News hired Stelson to inspect the pieces. His findings were published in Popular Science.

In 1971, he was named dean of engineering and assistant vice president of academic affairs.

He was a registered professional engineer in California, Ohio, Pennsylvania, and West Virginia.

From 1980 to 1984, Stelson took a leave of absence to serve as Assistant Secretary for Conservation and Solar Energy for the Carter Administration.

He served as science and technology advisor for Georgia Gov. George Busbee.

In 1988, Stelson endowed the Stelson Lecture Series, named for his father Hugh Stelson, a mathematician. During his tenure at Georgia Tech, annual research spending grew from $8 million in 1974 to $122 million in 1990.

He received his bachelor of science (1949), his master of science (1950), and his Ph.D. in civil engineering (1952), all from Carnegie Mellon University. He was a visiting associate (National Science Foundation Post Doctoral Fellow) at the California Institute of Technology from 1962 to 1963.

For more, visit the Wikipedia article on Thomas E. Stelson. 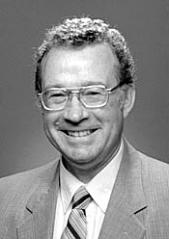 The history of GTRI is one filled with intrigue, innovation and impact. Learn about GTRI's exciting past, present and future. View video
< Dr. Maurice W. LongUpDr. Donald J. Grace >