Adapted from the October 1961 issue of The Research Engineer:

In 1961, 46-year-old Robert E. Stiemke began a two-year stint as Director of Georgia Tech's Engineering Experiment Station (EES). He believed that Georgia Tech's future in research would be a bright one.

"It will grow increasingly important," the Milwaukee, Wisconsin, native said at the time, "not only to Georgia and the nation, but to Tech's graduate program and other phases of campus activity."

Stiemke, a former director of Tech's School of Civil Engineering who succeeded Dr. James E. Boyd at the Station's helm, believed every effort must be applied to make the Station's work as meaningful as possible to academic work. "Research, not only here at the Station, but in the instructional departments, should be coordinated for the greatest benefit of all."

Almost immediately, Stiemke cited the lack of adequate space as a problem for EES. He believed it to be a problem that confronted the entire Georgia Tech campus. He mentioned another institutional problem — lack of communications. "Everyone recognizes this problem," Stiemke said, "and everyone should make a conscientious effort to improve the situation."

Stiemke spent his early days on the job meeting each afternoon with individual EES division heads in orientation sessions. "I appreciate the help and good counseling I have received during this transition," Stiemke remarked, "and I am much impressed with the caliber of Station personnel."

Stiemke was educated at the University of Wisconsin, where he received two civil engineering degrees. His engineering work included service with the U.S. Army Corps of Engineers in the Milwaukee District, consulting for the U. S. Public Health Service in the New York District and miscellaneous consulting in sanitary engineering, while also teaching.

At the time of his appointment as Director of EES, Stiemke had authored a number of scientific articles on a wide range of engineering topics. Among them were: "Stream Pollution — Your Professional Responsibility," N. C. Engineer; "Minimum Requirements for Sanitary Engineers," Civil Engineering Bulletin; and "Why Young Engineers Don't Want to Teach," The American Engineer. He was a member of 19 scientific and professional societies. He served as director of the American Sanitary Engineering Inter-Society Board, national director of the Water Pollution Control Federation from 1957 to 1960, president of the Georgia Engineering Society in 1956, and president of the Atlanta Post, Society of American Military Engineers, 1957. He also served on the Engineering Advisory Board of Georgia Governor Ernest Vandiver.

On the personal side, Stiemke was a member of the Presbyterian Church, was married, and had three children. He was something of a "globe-trotter," having toured the entire United States, parts of Canada, parts of Mexico, Caribbean Islands, 16 European countries visiting engineering schools, and South America as a delegate to the Pan American Congress on Engineering Education in Buenos Aires. In the summer of 1960, Stiemke visited Arctic Air Force bases in Greenland, Canada, and Alaska as a guest of the Air Force Director of Civil Engineering.

For more, visit the Wikipedia article on Robert E. Stiemke. 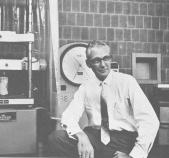 The history of GTRI is one filled with intrigue, innovation and impact. Learn about GTRI's exciting past, present and future. View video
< Dr. James E. BoydUpWyatt C. Whitley >