Herschel H. Cudd was appointed director of the EES in July 1953, after serving as acting director since November 1952. Although he stepped down in November 1953, his administration made far-reaching changes to the EES — many of which are part of GTRI's corporate culture today.

Cudd addressed financing of the EES, brokering a deal that would give Georgia Tech 13/46 of overhead; the contract organization — now Georgia Tech Research Corporation — would receive 10/46, and the EES would receive 23/46 to cover administrative costs.

Cudd also expanded the research from a few concentrated researchers to include 66 faculty in 15 schools performing research at the EES in 1952-53. He also changed the promotion system for researchers.

Many researchers held the rank of professor, despite lacking a doctorate, or comparable qualification, as determined by the Georgia Board of Regents (BOR). The new system, approved in spring 1953, used the BOR's qualifications for promotion and mirrored the academic tenure track. Research engineers, now defined as "adjunct members" of the General Faculty, were excluded from the Faculty Senate.

Cudd resigned in 1953 to become vice president and manager of Research and Development of the American Viscose Corporation. In 1960, he became head of the AviSun Corporation.

From 1963 to 1974, Cudd was president of Amoco Chemical Corporation, a subsidiary of Standard Oil, of which he was also a director. He was senior vice president of the R.J. Reynolds Tobacco Co. when he retired in 1982.

He intially was appointed head of the Chemical Sciences Division of EES in March 1950, and previously served as director of the Lantuck Division of the West Point Manufacturing Co. While at West Point, he utilized his experience studying the use of synthetic resins in textile engineering, which led to West Point's fabric, "Lantuck." Up until he came to the EES, Cudd managed production and sales of the fabric.

For more, visit the Wikipedia article on Herschel H. Cudd. 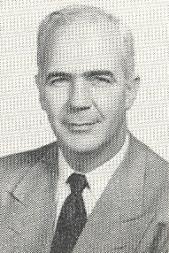 The history of GTRI is one filled with intrigue, innovation and impact. Learn about GTRI's exciting past, present and future. View video
< Gerald A. RosselotUpPaul K. Calaway >