After about two years working as a research assistant at the Engineering Experiment Station, Glen Robinson took a job in Tennessee, working in nuclear physics. One day in 1951, his former professor, Jim Boyd, now the associate director of the EES, came to visit with an intriguing offer.

A company was being formed to produce and market some of the innovations coming out of the EES, Boyd explained. He'd like Robinson to come back to Atlanta and work as general manager for the venture. And by the way, there was no salary. The job would cost Robinson $100, but he could also work part-time at the EES. "I had to sell contracts to earn my own salary," Robinson laughed.

The Birth of a Technology Powerhouse

Robinson accepted, and his hundred bucks went into the pot, along with the money from six other EES investors. In October 1952, Scientific-Atlanta was born.

"The idea was to manufacture some of the developments at Georgia Tech that were suitable for the commercial market and not appropriate for a university," Robinson said.

Robinson's return to EES was short-lived due to concern that his employment situation presented a conflict of interest. He was given a choice: work for either the EES or Scientific-Atlanta, but not both. He chose the latter, and moved up to become Scientific-Atlanta’s president and chief executive officer.

Scientific-Atlanta's first major product was an antenna pattern recorder, a device for testing antenna performance. This led to a series of products, such as antenna positioning systems.

The company played an integral role in helping NASA establish ground stations for communications with astronauts during projects Mercury, Gemini, and Apollo. When John Glenn became the first American to orbit the Earth in 1962, his voice was transmitted and received by radio antennas designed with equipment built by Scientific-Atlanta.

As the company grew, it hired more Georgia Tech graduates, many of whom ultimately followed Robinson's entrepreneurial example and set out on their own. At least 100 of Atlanta's high-tech companies can trace their roots to Scientific-Atlanta.

In the 1970s, Scientific-Atlanta was quick to understand the potential application of satellite communications technology to cable television. "One of the first satellite systems we sold was to Ted Turner, which allowed him to broadcast channel 17 around the country to other cable systems," Robinson said.

Aiding the Advent of Cable TV

Robinson retired from Scientific-Atlanta in 1979 and went on to found other ventures. In 1998, Robinson endowed a research chair in electro-optics at GTRI — the institute's first — and a chair in nonlinear science at Georgia Tech's School of Physics.

Scientific-Atlanta continues to produce equipment for cable television operations and satellite technology, as well as instruments for electronic measurement and testing. It was acquired by Cisco Systems in 2006. 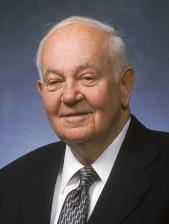 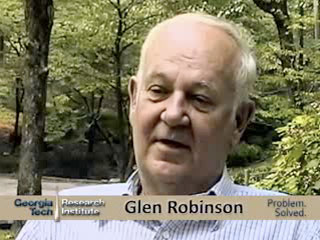 When Glen Robinson, PHY ’48 and MS PHY ’50, went to work at EES as a student at Tech, there was talk about starting a company but it didn’t happen until years later. That company became Scientific Atlanta but that wasn’t its original name. Aug 31, 1995

The history of GTRI is one filled with intrigue, innovation and impact. Learn about GTRI's exciting past, present and future. View video
< Dr. James J. HudgensUpDr. H. Allen Ecker >