One of the founders of Scientific-Atlanta, Gerald Rosselot was EES director from 1941 to 1952.

Rosselot initially came to Georgia Tech in 1934 and served as a professor in both physics and mathematics. In the span of four years (1937 to 1941), he rose through the ranks of assistant professor to full professor of physics.

His tenure at GTRI's precursor began right as the United States' role in World War II was expanding. As a result, the number and value of EES contracts significantly increased, and the war is generally credited with expanding electronics contracts — specifically telecommunications and electronic warfare. By the end of World War II, Georgia Tech boasted nearly a quarter of a million dollars in sponsored research.

The Rosselot administration is also credited with purchasing an electron microscope for the EES in 1946 for $13,000 (more than $140,000 today), the first such instrument in the Southeast and one of a few in the U.S. The Research Building was expanded, and in 1947 a $300,000 (nearly $3 million today) Westinghouse A-C Network Calculator was gifted by Georgia Power Corp.

Rosselot resigned as EES director to work more with Scientific-Atlanta, which he founded with Glen P. Robinson Jr. and future EES director James E. Boyd. In 1953, he joined Bendix Corporation as its director of Engineering. He became director of Scientific and University Relations for Bendix in 1955 and would later become director of the Research Laboratories Division and then vice president. He retired in 1972 due to illness and died in August of that year.

An IEEE Fellow, Rosselot received his bachelor of arts degree from Otterbein College in 1929, his master of arts in 1930, and his Ph.D. in 1936, both from The Ohio State University.

For more, visit the Wikipedia article on Gerald Rosselot. 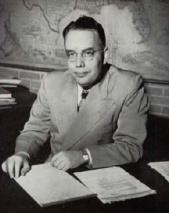 The history of GTRI is one filled with intrigue, innovation and impact. Learn about GTRI's exciting past, present and future. View video
< Harold A. Bunger (acting)UpHerschel H. Cudd >