Probably more than any other individual, Jim Boyd was responsible for Georgia Tech's development and success in radar and antenna research. His extensive service to Georgia Tech includes directorship of the EES from 1957-1961.

Boyd, with Professor F. E. Lowndes, co-authored a groundbreaking 1947 study titled, "Propagation Studies of Electromagnetic Waves." The work led to the first of many major radar development contracts for EES. It also secured Boyd's growing reputation as one of the nation's foremost innovators in the field.

Laying the Groundwork for Scientific-Atlanta

In 1950, Boyd was named head of the newly formed Physics Division at EES, while also serving as associate director. The following year, he helped found an electronics company that would become Scientific-Atlanta.

"Dr. Boyd is really considered the founder of Scientific-Atlanta," said Glen P. Robinson Jr., one of the six original investors recruited by Boyd to join the company.

During Boyd's leadership, EES scored impressive gains in electronic research. In 1959, this work led to the creation of the Electronics Division, which focused on radar and communications.

EES began to play a larger role in economic development by providing direct management services and technical assistance to Georgia businesses. These activities were formalized in 1960, when the organization's charter was amended to establish an industrial extension service at the EES.

Boyd resigned from EES in 1961 to accept the job as president of the State University of West Georgia.

When Georgia Tech President Arthur Hansen resigned in 1971, Boyd returned to Georgia Tech as interim president for one year. But Hansen's push for the absorption of EES by Georgia Tech had created conflict on campus, particularly among EES. Hansen charged Thomas Stelson, the new dean of engineering, with authority to oversee and coordinate the full integration of EES into the academic organization of Georgia Tech.

Now in charge, Boyd, who was highly regarded by academic and EES staff, sought a middle road to resolve the situation. Stelson was given the additional title of assistant vice president for academic affairs on a temporary basis and tasked with reorganizing EES. But rather than pursue a complete absorption of EES by Georgia Tech, the idea was to enact closer control of EES, while directing it toward more aggressive pursuit of revenue-generating contracts.

Boyd retired after his brief but busy year at Georgia Tech's helm. He passed away in 1998 at age 91 at his home in Carrollton, Georgia.

For more, visit the Wikipedia article on James E. Boyd. 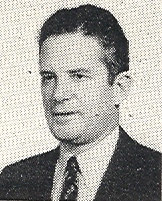 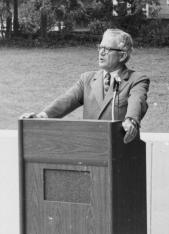 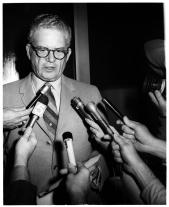 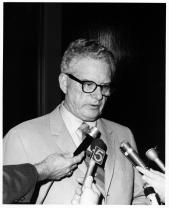 The history of GTRI is one filled with intrigue, innovation and impact. Learn about GTRI's exciting past, present and future. View video
< Paul K. CalawayUpRobert E. Stiemke >