Gerber came to GTRI from the Massachusetts Institute of Technology Lincoln Laboratory, where he served as associate head of the Air and Missile Defense Technology Division responsible for programs in air and ballistic missile defense.

Gerber joined the Lincoln Laboratory as a staff member in 1988. In 1991, he took an assignment at the Kwajalein Missile Range in the Marshall Islands, where he was responsible for space surveillance programs and later served as leader of the ALTAIR radar. He returned to Lincoln Laboratory in 1996 as assistant leader of the Air Defense Techniques Group, where he helped build the Laboratory's Aegis Ballistic Missile Defense program.

In 1997, he became an Intergovernmental Personnel Act appointee with the Navy's Program Executive Office for Theater Surface Combatants. His efforts were focused on the development and implementation of a plan for the next generation of radars for the Surface Navy.

Gerber emerged as the top candidate from a national search that generated 48 candidates who were screened by a 15-member search committee composed of GTRI and Georgia Tech staff. 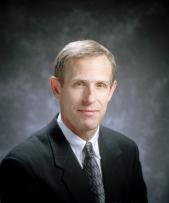 The history of GTRI is one filled with intrigue, innovation and impact. Learn about GTRI's exciting past, present and future. View video
< Dr. Robert T. McGrathUpDr. Lora Weiss (Interim) >