An innovative ultra-wideband, phased-array antenna design developed at GTRI could replace up to five conventional antennas — no small matter when it comes to aircraft and military vehicles, where economies of space and weight are critical.

The fragmented-aperture antenna, a computer-designed planar system, has demonstrated a 33-to-1 bandwidth — well beyond the 10-to-1 ratio achieved by conventional designs. Researchers believe the range can be extended to at least 100-to-1.

Since each function — radar, communications, and so forth — typically requires separate antennas specific to certain bandwidths, the value of the ultra-bandwidth design is that several different functions can be accommodated with a single antenna. It takes up less space and weight, a benefit for ships — particularly submarines — because they carry dozens of antennas. Aircraft have limited surface area for antennas; therefore, weight is always a concern. Ground vehicles and even individual soldiers could benefit from reducing the number of antennas they must carry.

A fragmented-aperture antenna is a laminated material sandwich of foil, foam, film, and circuitry. A prototype that works down to 300 MHz measures just 16 inches square and about three inches thick.

Because it is flat and can be conformed to surfaces, the new antenna design could also have commercial applications. The technology could also have applications for devices that would not need broad bandwidth and could be fabricated as wearable antennas incorporated into military uniforms or tents.

Key to the new design was the electronic interaction between antenna elements known as mutual coupling. For years, antenna designers were taught to minimize this interaction. But with detailed computer modeling, GTRI engineers realized they could take advantage of it by electrically connecting the elements, thereby extending the bandwidth capacity well beyond conventional limits.

The ultra-wideband design also brought about an interesting testing situation for the research team. Since test facilities were constructed for conventional devices, researchers had to evaluate their 33-to-1 prototype in three different antenna test facilities to cover the entire frequency range. 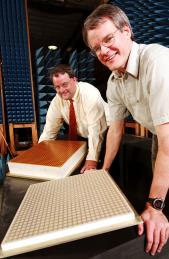 The history of GTRI is one filled with intrigue, innovation and impact. Learn about GTRI's exciting past, present and future. View video
< New armored vehicle design improves safety and mobilityUp