The mobile radar unit known as BICOMS was believed to be the world’s largest mobile system for measuring radar cross section. Holloman Air Force Base, NM, 1999.

Expanding upon radar work started at the end of World War II, EES scientists began investigating the millimeter portion of the electromagnetic spectrum. The advantages of millimeter waves include their ability to provide accurate, excellent image identification and resolution. They also provide remote measurements while operating through smoke, dust, fog or rain.

However, millimeter waves are vulnerable to absorption by certain atmospheric and meteorological activity. EES scientists discovered which frequencies work best for a particular task. They better identified and refined windows of attenuation of the frequencies that mitigate atmospheric interference with the signals.

The millimeter-wave research that began at EES continued under GTRI. It evolved into an ongoing process of discovering the appearance of objects from tanks to raindrops when viewed by high-frequency waves.

Researchers determined the types of data they could derive from the interaction of those objects with the waves. In the process, they pioneered the fundamental science of the millimeter wave environment. They also invented the hardware such as antennas, receivers and transmitters to use that end of the spectrum.

A GTRI engineer makes adjustments to what, at the time, was the world’s highest frequency millimeter wave radar, 1981.

The first military designation millimeter wave radar was built at Georgia Tech in the late 1950s. It was followed by a succession of increasingly advanced models. Research to build a radar with a wavelength as near to one millimeter as possible was ongoing. By the 1980s, it culminated in the development of the world's highest frequency microwave radar, operating at 225 GHz.

EES developed this radar to test high frequency radar techniques, and to obtain the first target and natural background at these frequencies. The device provides useful imaging with an antenna less than 30 centimeters in diameter. It is coherent, meaning it can detect Doppler returns from moving targets.

Millimeter spectroscopy research paved the way for exploiting millimeter waves for measurements in:

Millimeter wave radiometry developed at GTRI has improved the accuracy of weather forecasting and computer models of the Earth's climate. In the late 1970s, a millimeter wave radiometer began service aboard a NASA aircraft, where it monitored storm activity from an altitude of 60,000 feet. Scanning about 5,000 miles of atmosphere per hour, the device recorded the emitted and reflected energy of storms, including the almost infinitesimal amounts of energy emitted by moisture inside a storm.

Georgia Tech scientists also achieved a number of firsts in millimeter characterization of clutter and targets -  essential data for reliable millimeter radar systems. Since the 1960s, more than a dozen projects have provided millimeter measurements of the ocean, rain, snow-covered ground, desert, foliage and foreign military vehicles. In the 1980s,researchers conducted a comprehensive study of the image-quality effects of atmospheric turbulence and precipitation on millimeter wave propagation.

The versatility of millimeter wave technology is illustrated by the radar flashlight, a device that detects respiration at a distance. Originally developed to locate wounded soldiers on battlefields, it could prove useful in situations where access is difficult, such as a collapsed building.

GTRI’s RADAR Flashlight could help police officers search for a suspect hiding behind a door, 2001.

The mobile radar unit known as BICOMS was believed to be the world’s largest mobile system for measuring radar cross section. Holloman Air Force Base, NM, 1999. 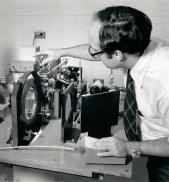 A GTRI engineer makes adjustments to what, at the time, was the world’s highest frequency millimeter wave radar, 1981.

GTRI’s RADAR Flashlight could help police officers search for a suspect hiding behind a door, 2001.

The history of GTRI is one filled with intrigue, innovation and impact. Learn about GTRI's exciting past, present and future. View video
< InnovationsUpUpgrading defense technology >