Solar energy research at Georgia Tech began at the Engineering Experiment Station in the 1970s, during the first energy crisis. It is now resurging as our nation again looks for petroleum alternatives.

A Breakthrough in Pyrolysis

A 325 kW, 500-mirror solar thermal test facility, the second largest of its kind in the United States, was constructed at Georgia Tech in 1977. GTRI researcher Tom Brown used it to demonstrate the ability to store solar energy for nearly an hour.

In 1980, Brown and researchers from Princeton University announced a breakthrough in pyrolysis, an established process for producing liquid and gaseous fuels from biomass materials, such as wood and corn cobs. Highly concentrated solar energy, rather than burning biomass, provided the heat necessary for pyrolysis reactions.

The method's advantages were that it conserved the biomass feedstock and produced a higher quality fuel. Subsequently, Senior Research Engineer Jim Walsh and others were instrumental in developing standards for several types of biomass fuels through the American Society for Testing and Materials.

Researcher Doug Neale and other engineers at the Solar Thermal Test Facility made another breakthrough. They produced usable electricity with a Swedish-built external combustion engine with pistons driven by helium that was heated by intense sunlight. At the time, the engine was three times more energy-efficient than photovoltaic panels. The engine's manufacturer later marketed it to supply the power needs for irrigation and desalination in Third World countries.

A Shift to Photovoltaics

As research funding interests changed, the focus of Georgia Tech's solar energy studies moved to photovoltaic devices, which convert sunlight directly into electricity. By the mid-1980s, utility companies also shifted their interest to photovoltaics as the efficiency of the devices increased and the cost of making solar cells decreased.

A research program led by electrical engineering Professor Ajeet Rohatgi studied new semiconductor materials and designed innovative devices. His work garnered Georgia Tech a Department of Energy contract to operate the University Center of Excellence for Photovoltaics Research and Education. Its goal is to help make photovoltaics a leading contender in the search for clean, renewable energy sources.

One of the center's working research laboratories is the 340 kW photovoltaic system installed on the roof of the Georgia Tech Aquatic Center built for the 1996 Olympics. The system was designed to handle about a quarter of the center's needs while providing significant, long-term data on how to build and maintain large-scale photovoltaic structures.

The system was created by Rohatgi and electrical engineering Professor Miroslav M. Begovic, along with Richard Long, project support manager in Georgia Tech's Office of Facilities. Its solar panels are connected to a grid supplied by Georgia Power Company. They produce about 400 mW hours of electrical energy per year, enough to run 70 average homes, according to Rohatgi.

In 1997, Rohatgi's research team reported on rapid thermal processing, a process that cuts in half the time it takes to make a silicon solar cell without diminishing its performance. The group produced a solar cell with the same efficiency rating (18%) as one made by conventional furnace processing. Further improvements led to cells with 17% efficiency that can be produced in only two hours, compared to the 17 hours needed for a furnace-processed cell.

One of the newest innovations in solar energy comes from GTRI's Electro-Optical Systems Laboratory via New York City. The Big Apple's skyline has inspired poems, songs, and an innovative design for solar cells.

While passing through Manhattan one day, Senior Research Engineer Jud Ready was struck by the way sunlight played on the densely arrayed skyscrapers. It gave him an idea: a three-dimensional solar cell-looking something like a micro-size urban downtown could capture nearly all the light that hits it, even when the sun is not directly overhead.

Ready designed a photovoltaic cell studded with rows of structures about 100 microns tall, 40 microns by 40 microns square, 10 microns apart. The cell was built from arrays containing millions of vertically aligned carbon nanotubes. Unlike conventional flat solar devices that reflect as much or more light than they can absorb, the three-dimensional configuration traps light between the tower structures. It boosts the efficiency of photovoltaic systems while reducing their size, weight, and complexity.

The efficiency of the cell increases as the sunlight goes away from the perpendicular. This eliminates the need for a mechanism to keep pointing the cell toward the sun.

The devices could find near-term applications for powering spacecraft. And by enabling efficiency improvements in photovoltaic coating materials, they could also change the way solar cells are designed for a broad range of applications.

"Our goal is to harvest every last photon that is available to our cells," said Ready. "By capturing more of the light in our 3D structures, we can use much smaller photovoltaic arrays. On a satellite or other spacecraft, that would mean less weight and less space taken up with the photovoltaic system."

The ability of the cells to absorb virtually all of the light that strikes them could also enable improvements in the efficiency with which the cells convert the photons they absorb into electrical current.

The Advanced Components Test Facility was a 325 kW thermal solar furnace operated by EES for the U.S. Department of Energy, 1979

With a gas chromatograph, Dave Hurst determines the composition of gaseous mixtures to develop and improve pyrolysis and gasification processes. 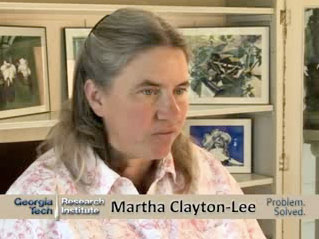 Martha Clayton-Lee, BS 1975, BS ME 1984, MS ME 1985 worked at the Research Station as artist and researcher. One of her special projects involved Georgia Tech’s Solar Furnace. She explains its purpose and describes it in detail. Recorded on July 16, 2008.

The history of GTRI is one filled with intrigue, innovation and impact. Learn about GTRI's exciting past, present and future. View video
< Compact radar range tests antenna performanceUpAdding three dimensions to innovation >