An unmanned aerial vehicle powered by fuel cells running on compressed hydrogen is one of the most innovative developments to fly out of GTRI and Georgia Tech's Aerospace Systems Design Laboratory. The project was spearheaded by David Parekh, GTRI’s former deputy director and founder of Georgia Tech’s Center for Innovative Fuel Cell and Battery Technologies.

Parekh wanted to develop a vehicle that would both advance fuel cell technology and galvanize industry interest. "A fuel cell aircraft is more compelling than just a lab demonstration, or even a fuel cell system powering a house," Parekh explained. The automotive industry has made strides with fuel cells. But apart from spacecraft, little has been done to leverage fuel cell technology for aerospace applications.

Fuel cells, which create an electrical current when they convert hydrogen and oxygen into water, are attractive as energy sources because of their high energy density. Higher energy density translates into longer endurance.

The proton-exchange membrane system that flies the 22-foot wingspan aircraft generates only 500 watts. “Five hundred watts is plenty of power for a light bulb, but not for the propulsion system of an aircraft this size,” said Research Engineer Adam Broughton.

Other research groups have also demonstrated hydrogen-powered unmanned aerial vehicles, but these aircraft were either very small or used liquid hydrogen. Compressed hydrogen, which the automotive industry uses, is cheaper and easier to work with.

Georgia Tech’s demonstrator vehicle operates like a full-sized aircraft, requiring no auxiliary batteries or boosters for takeoff. The smaller planes had no landing gear and had to be hand-launched. 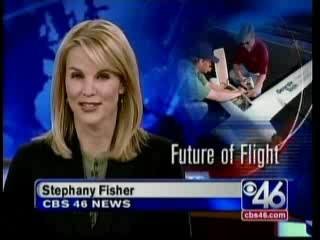 The history of GTRI is one filled with intrigue, innovation and impact. Learn about GTRI's exciting past, present and future. View video
< Operating a computer with neural signalsUpMicroflyer creates quite a flap >