Military pilots can prepare their flight charts faster and with greater accuracy, thanks to FalconViewTM, a laptop computer-based system project that began in 1992 at GTRI. FalconView replaces hand-drawn mission maps with high-resolution graphics displayed on a laptop computer screen carried onboard the aircraft.

The system displays data, such as the locations of no-fly zones, buildings, and other structures. Its maps also note objects that produce electronic emissions within certain bands, including friendly aircraft and ships. Originally designed for use in fighter airplanes, FalconView has been customized for a range of military aircraft, including helicopters and cargo transports.

Connected to a modem or network, FalconView can receive the latest information concerning troop movements, weather, and detailed threat information. The system takes into account topography, flight elevation, and the range of a threat's radar system to let pilots know whether their planes are detectable.

In addition, pilots can set up maps and give different symbols to various features. Each symbol can be clicked for more information in the form of a text document, sound file, photograph, or even a webpage — each related and geo-referenced to sites on the map.

An estimated 45,000 aircrew members worldwide use FalconView. Among them are members of the 89th Airlift Wing at Andrews Air Force Base, Maryland, which provides executive support missions for the president, vice president, and other high-ranking U.S. government officials.

FalconView has also been adapted to non-military uses. The U.S. Forest Service has relied on it to plot large forest fires and plan the release of flame-retardant chemicals onto affected areas.

The U.S. Navy used FalconView to map whale sightings for an environmental study. It also serves as the primary geographic display system for the Airship Whale Search Network. 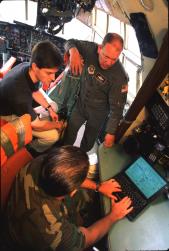 Operators demonstrate FalconViewTM aboard a C-130 aircraft parked at Dobbins Air Reserve Base near Atlanta, GA, 1997

The history of GTRI is one filled with intrigue, innovation and impact. Learn about GTRI's exciting past, present and future. View video
< Photonic sensors make environmental senseUpOperating a computer with neural signals >