The radomes developed at GTRI are used for intelligent missile systems, such as the Patriot. But in the late 1950s, Engineering Experiment Station (EES) scientists faced a challenge. How could radomes, the structures that shield a missile's sensors, withstand rapid high heating and harsh weather while maintaining a special quality that allows radio signals to pass through them?

Highly regarded for their work in high-temperature ceramic materials, EES researchers developed a slip-cast, fused-silica technique for forming refractories of massive size and complex shapes like radomes, missile nose cones, and rocket engine components. Over the years, they developed several improvements to the fused-silica process.

In 1970, researchers discovered that by manipulating the temperature, rate, and duration of heating, they could affect the development of the ceramic's mechanical strength in a phenomenon called sintering. The resulting material was 50% stronger than previous efforts yet maintained the necessary electromagnetic properties.

By the end of the 1980s, GTRI researchers learned that aluminoborosilicate fibers added strength. A further refinement was made when they found that short fiber lengths 20 or 30 times their diameter doubled radome strength with only a minimal loss of density.

The fibers increased the amount of energy needed to break the fused silica material. And should a crack develop, it would run into a fiber and follow the fiber along a tortuous path. The shorter fibers also prevented clumping, a condition that results in lower density and strength and large flaws during slip casting. 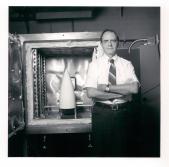 The history of GTRI is one filled with intrigue, innovation and impact. Learn about GTRI's exciting past, present and future. View video
< Upgrading defense technologyUpUncovering the science of atomic collisions >