Microsatellites are designed to operate autonomously, eliminating the need for ground-based guidance and control and potentially extending satellites' capabilities. They carry an inherent redundancy, multi-mission capability, and a significantly lower cost because they can be mass-produced. It may also be possible to deploy clusters of microsatellites, orbiting in formation, and electronically networked to act as a single large radar-antenna aperture.

Early experimentation involved a successful launch of a test vehicle weighing 68 pounds and measuring about three feet by 18 inches. The XSS-10 spacecraft was carried aloft via a second-stage, modified Boeing Delta II rocket. It carried a computer programmed with specific navigation and maneuvering operations and gathered real-time data to autonomously update the software's algorithms once orbit was achieved. 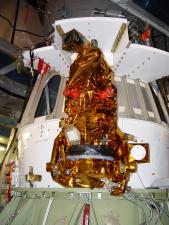 The XSS-10 spacecraft - a first-of-a-kind microsatellite weighing 68 pounds and measuring about three feet by 18 inches - launched from Cape Canaveral in January 2003.

The history of GTRI is one filled with intrigue, innovation and impact. Learn about GTRI's exciting past, present and future. View video
< Giving new life to old technologyUpImproving accessibility by design >