In the late 1980s, GTRI Researcher Nile Hartman developed an optical sensing apparatus and sensing method that offered better stability and a lower cost. The invention was patented in 1990, but Hartman was already taking his research to the next level. He was developing an integrated optic interferometric sensor that could quickly detect even the smallest amounts of various contaminants in air, soil, groundwater, and food.

It works like this: The speed of light increases or decreases when passing through materials of differing optical properties. Detection of contaminants becomes possible by measuring a contaminant's influence on the optical properties of the sensor. Then researchers observe the effects on these properties through changes in the transmitted laser light.

An additional application of the photonic sensor technology is a rapid-response biosensor for detecting microbial contamination in food, particularly poultry. For example, a biosensor developed at GTRI can detect avian influenza infection in poultry in just minutes.

In 1997, Hartman’s work reached a major milestone when it was patented by Hartman and the Georgia Tech Research Corporation. Subsequently, the sensor was licensed commercially by the Atlanta-based company Photonic Sensor. 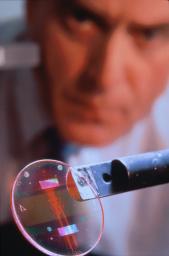 The history of GTRI is one filled with intrigue, innovation and impact. Learn about GTRI's exciting past, present and future. View video
< A radical approach to air pollutionUpFalconView keeps pilots up-to-date >