ChromaDepth 3D uses pieces of microptic film to selectively shift the points at which different colors of light are focused. Known as chromostereoscopy, the technique makes objects of different colors appear to be at varying distances from the viewer.

Steenblik's discovery came after he noticed slight three-dimensional effects produced by a video game. The effect was caused by an imperfection called chromatic aberration in the lenses of the eye. Also, Steenblik knew the brain expects that red color often comes from objects close to the viewer, while blue tends to come from objects far away.

He worked to enhance the effect and concluded that passing light through two different liquids would provide the necessary shifting or refraction. In his first prototype, he used two liquids of Chinese cinnamon oil and glycerin. The liquids provided the opposing refraction needed to produce right-eye and left-eye views from the same two-dimensional image.

Steenblik patented the discovery in 1983. He soon thereafter founded Atlanta-based Chromatek Inc. with New York businessman Frederick Lauter. The company owners then developed 3D glasses based on double prisms rather than liquids, but they did not work as well as Steenblik hoped.

Collaboration with binary optics scientists at the Massachusetts Institute of Technology (MIT) led to the inexpensive manufacture of the complex prism patterns needed to produce the three-dimensional effect. The new product debuted in 1992. Georgia Tech licensed the technique to Chromatek, while MIT licensed the binary optics technology to the company. 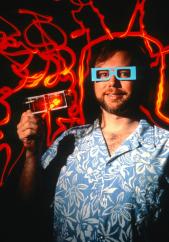 The history of GTRI is one filled with intrigue, innovation and impact. Learn about GTRI's exciting past, present and future. View video
< Here comes the sunUpTechnology for the poultry industry >